Ben Roethlisberger Officially Retires And is Now Eligible For Enshrinement In The Pro Football Hall Of Fame In 2027. 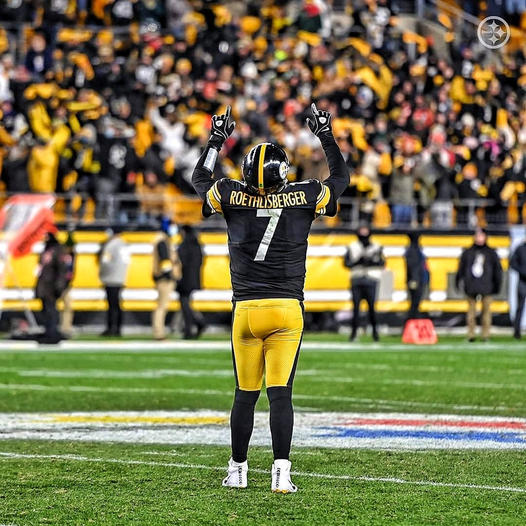 Ben Roethlisberger is done playing in the NFL after 18 seasons. He officially announced his retirement yesterday, Thursday 27, 2022.
That makes Big Ben eligible for enshrinement in the Pro Football Hall of Fame in 2027.
The Pittsburgh Steelers quarterback officially announced his retirement in a social media post, bringing to an end an 18-year career – the longest of any quarterback who played with only one team – that included two Super Bowl titles and six Pro Bowl selections.
"The time has come to clean out my locker, hang up my cleats, and continue to be all I can be to my wife and children,” Roethlisberger said in the video. “I retire from football a truly grateful man.”
Ben grew up in Findlay, Ohio, about two hours outside of Cleveland, and attended Miami University in Oxford, Ohio. He was drafted by the Pittsburgh Steelers, who had the 11th overall pick, in the 2004 draft.
The Steelers never had a losing season, over an 18-year span, while Roethlisberger was the starting quarterback.
Roethlisberger leaves the game as the longest tenured player in franchise history. He played more seasons and appeared in more games than any other Steeler.
Big Ben, who is 39-years-old, led the Steelers to 165 regular season victories; that ranks fifth all-time in NFL history.
Roethlisberger's signature, though, was his ability to perform in clutch situations. Only Manning (54) had more game-winning drives than Roethlisberger (53), and only Manning (43) and Brady (42) had more fourth-quarter comebacks (41).
Big Ben's postseason performance ranked among the most prolific in NFL history. His 13 playoff victories rank as seventh best and his 5,972 postseason passing yards are third most; trailing only Brady and Manning.
.
Only four quarterbacks have more Super Bowl rings, including Terry Bradshaw.
After missing several games throughout his career due to injury, the most serious incident was in 2019 when Roethlisberger sustained an elbow injury in Week 2 which necessitated season-ending surgery. He returned the following year and led Pittsburgh to an 11-0 start, but the Steelers faltered and lost four of their final five regular-season contests. They went to the playoffs in the the wild-card round and fell to Cleveland, it was a rare loss to the Browns.
Big Ben chalked up a 26-3-1 career record against the Browns, including a 26-14 win at the end of this season.
Roethlisberger completed his 57th game-winning drive (including playoffs) in the Week 18 OT victory over the Ravens; only Tom Brady, with 67, has more.
In the Wildcard Playoff game loss to the Chiefs, Ben Roethlisberger passed Brett Favre and Joe Montana to move into 3rd place on the NFL's all-time playoff passing yards list.
Ben Roethlisberger walking onto the field long reminded me of John Wayne appearing in a scene in a Western movie. He might be injured, his team might be down, but there was always the possibility that something remarkable would happen.
The final chapter of Big Ben's NFL football story will be written in Canton in 2027.
There are people, we know, who choose to focus not on what Ben Roethlisberger did as a football player, but rather incidents which occurred in his personal life, early in his NFL career. So, let's touch on that to close.

In March 2010, Ben Roethlisberger was accused of sexual assault by a 20-year-old college student at a Georgia bar. Prosecutors declined to file charges, but NFL Commissioner Roger Goodell suspended the quarterback under the league's personal conduct policy. An initial ban of six games was later reduced to four.

What I see here is, "Prosecutors declined to file charges."

Roethlisberger faced a civil lawsuit the previous July from a Nevada hotel employee who accused him of rape. The two settled in January 2012.

Here, I see the word rape, which people who hate Pittsburgh, the Steelers and Ben Roethlisberger pounce on, I see the phrase "civil lawsuit" and I see that they settled. Nowhere do you see the word police, charged, trial, convicted, or guilty. End of story.
Posted by Anthony McCune at 5:14 PM