The Cult Of Selfishness Is Killing America

The Cult Of Selfishness Is Killing America 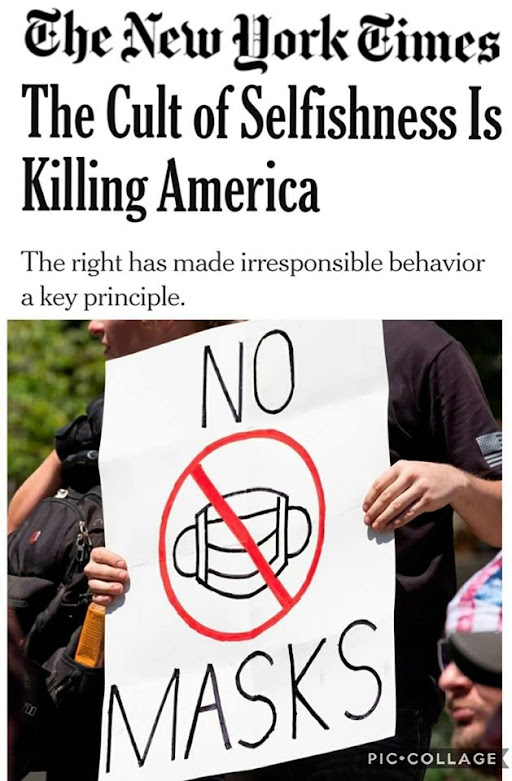 America’s response to the coronavirus has been a lose-lose proposition.

The Trump administration and governors like Florida’s Ron DeSantis insisted that there was no trade-off between economic growth and controlling the disease, and they were right — but not in the way they expected.

Premature reopening led to a surge in infections: Adjusted for population, Americans are currently dying from Covid-19 at around 15 times the rate in the European Union or Canada. Yet the “rocket ship” recovery Donald Trump promised has crashed and burned: Job growth appears to have stalled or reversed, especially in states that were most aggressive about lifting social distancing mandates, and early indications are that the U.S. economy is lagging behind the economies of major European nations.

So we’re failing dismally on both the epidemiological and the economic fronts. But why?

On the face of it, the answer is that Trump and allies were so eager to see big jobs numbers that they ignored both infection risks and the way a resurgent pandemic would undermine the economy. As I and others have said, they failed the marshmallow test, sacrificing the future because they weren’t willing to show a little patience.

And there’s surely a lot to that explanation. But it isn’t the whole story.

For one thing, people truly focused on restarting the economy should have been big supporters of measures to limit infections without hurting business — above all, getting Americans to wear face masks. Instead, Trump ridiculed those in masks as “politically correct,” while Republican governors not only refused to mandate mask-wearing, but they prevented mayors from imposing local mask rules.

Also, politicians eager to see the economy bounce back should have wanted to sustain consumer purchasing power until wages recovered. Instead, Senate Republicans ignored the looming July 31 expiration of special unemployment benefits, which means that tens of millions of workers are about to see a huge hit to their incomes, damaging the economy as a whole.

So what was going on? Were our leaders just stupid? Well, maybe. But there’s a deeper explanation of the profoundly self-destructive behavior of Trump and his allies: They were all members of America’s cult of selfishness.

You see, the modern U.S. right is committed to the proposition that greed is good, that we’re all better off when individuals engage in the untrammeled pursuit of self-interest. In their vision, unrestricted profit maximization by businesses and unregulated consumer choice is the recipe for a good society.

Support for this proposition is, if anything, more emotional than intellectual. I’ve long been struck by the intensity of right-wing anger against relatively trivial regulations, like bans on phosphates in detergent and efficiency standards for light bulbs. It’s the principle of the thing: Many on the right are enraged at any suggestion that their actions should take other people’s welfare into account.

This rage is sometimes portrayed as love of freedom. But people who insist on the right to pollute are notably unbothered by, say, federal agents tear-gassing peaceful protesters. What they call “freedom” is actually absence of responsibility.

Rational policy in a pandemic, however, is all about taking responsibility. The main reason you shouldn’t go to a bar and should wear a mask isn’t self-protection, although that’s part of it; the point is that congregating in noisy, crowded spaces or exhaling droplets into shared air puts others at risk. And that’s the kind of thing America’s right just hates, hates to hear.

Indeed, it sometimes seems as if right-wingers actually make a point of behaving irresponsibly. Remember how Senator Rand Paul, who was worried that he might have Covid-19 (he did), wandered around the Senate and even used the gym while waiting for his test results?

Anger at any suggestion of social responsibility also helps explain the looming fiscal catastrophe. It’s striking how emotional many Republicans get in their opposition to the temporary rise in unemployment benefits; for example, Senator Lindsey Graham declared that these benefits would be extended “over our dead bodies.” Why such hatred?

It’s not because the benefits are making workers unwilling to take jobs. There’s no evidence that this is happening — it’s just something Republicans want to believe. And in any case, economic arguments can’t explain the rage.

Again, it’s the principle. Aiding the unemployed, even if their joblessness isn’t their own fault, is a tacit admission that lucky Americans should help their less-fortunate fellow citizens. And that’s an admission the right doesn’t want to make.

Just to be clear, I’m not saying that Republicans are selfish. We’d be doing much better if that were all there were to it. The point, instead, is that they’ve sacralized selfishness, hurting their own political prospects by insisting on the right to act selfishly even when it hurts others.

What the coronavirus has revealed is the power of America’s cult of selfishness. And this cult is killing us.

Posted by Anthony McCune, Publisher, Stark County, Ohio News and Views... at 11:00 AM